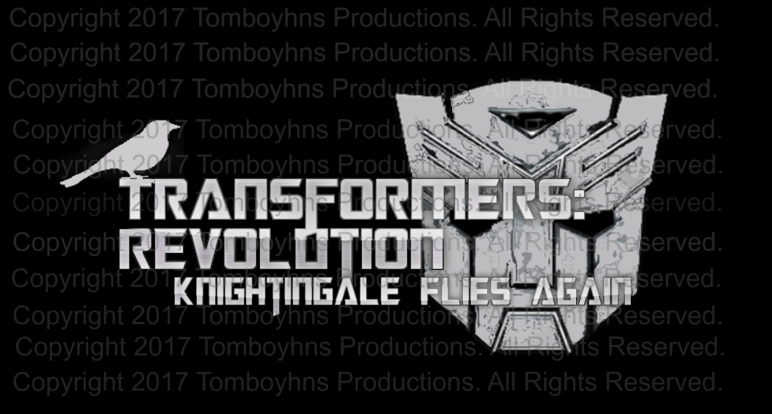 Taylor let out a frail, elongated squeal, before limply falling down. “KNIGHTINGALE!” Everyone scrambled to reach her. Bumblebee got on his knees and elevated her head. She heaved and gasped for breath, coughing and spitting blood building in her lungs. “We need a medic! Somebody get a human medic!” Bumblebee shouted out. Just as he said this, military tanks drove up the road, and dozens of soldiers were flooding out. One of them, was none other than Doctor Masumi Glau. There was more shouting, some confused, some desperate, but she couldn’t focus on it. The pain was overwhelming, but she kept holding on, desperately trying to breath. Bumblebee looked back at her. “It’s alright Knightingale, you’re going to be fine. Help is coming. Stay online!” he pleaded. He gently pulled the remaining wisps of hair out of her face. Promptly, Taylor shot up her hand and grabbed one of his servos. “I’m sorry! I’m so sorry!” she cried. “You don’t-” Taylor interrupted. “I’m sorry for what I’ve done! I just wanted to protect you! I’m so sorry!” she gasped. Then, she started hacking again, her head flying up and down constantly, her back nerves spazzing and kicking up. “Gale, you don’t need to be sorry!” Bumblebee hissed, “Anyone would have done that! I could care less of what you did!” Taylor’s eyes were widening, turning back to green iris’ again. She croaked, continuing to gasp for breath. The sun slowly began to rise over the horizon. She continued to gasp for breath. Bumblebee could tell she wasn’t satisfied. She was still trying to beg for forgiveness in between coughs. She seemed more distressed about what she had done than the fact she was dying. “Don’t give up because of what you did!” he ordered, “I don’t care what you’ve done. You did save me! You saved all of us! No matter what happened, we still owe you that! We still care!” Bumblebee wrapped his hand around hers. “So don’t go offline. Stay! This isn’t over! We still need you!” Taylor paused, and looked at him longingly. If Taylor wasn’t in so much pain, she would have started to cry. But now, she was starting to give out. She smiled. “Really?” she asked, her voice only a bit louder than a whisper. Bumblebee nodded. “Yes.” Taylor coughed again, this time, more weakly. “Thank you” she said. She lost control. Her eyelids closed. She couldn’t fight anymore.

A group of medics finally came rushing to the scene. Multiple voices shouted all at once at different times. “We need an ambulance!” and,  “Move in now!” and, “Fatally wounded!” One of the medics was carrying a red suitcase that was a defibrillator. Dr. Glau was with them. “1…2…3…Clear!” one of them shouted. When they applied the handles to her chest, it emitted an electroshock onto her chest. Her body jerked. No response. “Do it again!” Dr. Glau ordered. They did it again. Taylor’s body spazzed again from the electroshock. No response. Finally, after a third time, the blood drained from their faces. One of them shook their head, disappointed, and saddened. “No…No, she can’t…” Bumblebee looked down at his friend, now little more than a corpse. “She can’t be offline…” The other Autobots were watching the whole time. They couldn’t believe their optics. They couldn’t lose another one. Not now. Dr. Glau looked at Bumblebee, somberly. “I’m sorry” she simply said. Bumblebee closed his optics. He leaned forward, touching Taylor’s forehead. “You can’t…” he whispered again. He felt a hand on his shoulder. It was Optimus Prime. Bumblebee didn’t budge.

Cybertronians couldn’t cry. As robots, they physically couldn’t. But they would often find themselves paralyzed, and completely disregard what was happening around them, when they were traumatized, or suffering sadness.

Optimus Prime was trying to speak. But he too, was paralyzed.

The day seemed to be darkening as quick as the light came.

Bumblebee realized something. He picked his head up. He stared at Taylor for a moment, thinking. Jazz saw it. “What? Bee, what’s happenin’?” he asked. Once Jazz spoke, everyone else was now aware of it. “Wait…” Bumblebee mumbled. He looked hopeful, just a little more energized than before. “Could it…?” he murmured again. “For Primus sake, kid! Spit it out!” Ironhide snapped. Bumblebee turned to his companions.

“Back in the city, something happened…to Knightingale” he stated.

“I was fighting Barricade, he quickly overwhelmed me, but Knightingale stepped in to save me. During the fight, she got blasted in the face,” Bumblebee explained, “It would seem as if the entire half of her face would’ve been blown right off! But, once the fight was over, and we got a better look at it, the wound disappeared!”

“What do you mean, Bumblebee? How could an injury just, ‘disappear’?” Optimus Prime inquired.

“You know what that was, Doc?” said Jazz.

Before he could answer, Bumblebee heard some kind of crackling, and faint whistling. He turned. He was ecstatic by what he was seeing. The stab wound where Taylor’s heart was, was beginning to change. The pink flesh was building onto it, like water covering thirsty earth. The dark red layer of flesh was disappearing, and the hole was sealing. “Impossible!” Ratchet gasped. Bumblebee only had a huge grin burst onto his face. “Does that mean she’s…?” At last, the wound had completely disappeared. They all watched, more intensively than ever, waiting…praying for something to happen.

Taylor’s chest began to lift. Then, it lowered. They heard her take a huge gasp of breath, then let it out, calmly, and smoothly. Then, her eyes slowly peeled open, tiredly.

“Knightingale!” Bumblebee hissed, excitedly. It took Taylor a moment, but slowly, she turned her head slightly, and saw him. He was so close. A tiny smile curled onto her lips.

Dr. Glau jumped to her feet. “Squad Theta, I need an ambulance. Knightingale is alive. I repeat, Knightingale it alive!” she announced over the walkie talkie. All the Autobots sighed in relief. Although, Ratchet was surprised. “Cell regeneration” he mumbled, “Knightingale’s body can regenerate layers.” No one was listening to him though. Bumblebee beamed.

Taylor’s eyes moved around her environment, then glanced down at her wound. “Huh. I’m…not dead” she stated. Bumblebee couldn’t help but chuckle. “Yep, it’s not time to take a trip to the Allspark yet” he joked. She sighed, deeply. The two could hear an ambulance approach. Taylor eyelids were getting heavy again. But this time, she was feeling fatigued and exhausted. After all, she hadn’t had sleep in the events of the past two days. “Bumblebee?” she asked. “Yeah?” “I’m really tired. I’m gonna close my eyes now, okay? I’ll be alright, I promise. It’s just…How humans recharge…” Bumblebee nodded. “…Okay…” he replied, slowly. She smiled, clutching his hand for a little longer, before feeling a sense of security, and fell asleep. Another team of medics arrived, this time with a trolley. They lifted the dozing Taylor onto it, strapped her securely, and carried her away.

Taylor could sense the rays of sunlight streaming into the room. She peeled her eyes open. She was in a vast, empty room that almost looked like an aircraft hangar than a hospital room. She took a deep breath, and blinked. Then, she heard voices. “Wow! Interesting…” She recognized that voice. “Daniel?” She called. She turned her head and not just saw Daniel, but also Ratchet, walking together. “Taylor!” Daniel exclaimed. He ran up to her bed as Taylor sat up. “Easy Knightingale, humans get dizzy when they’re up too fast” Ratchet warned.

Taylor rubbed her eyes. “How long was I asleep?” She asked.

“A good two days. You were out cold!” Daniel replied.

Taylor sighed. “It’s been an intense week.” She looked around. “Where are we?”

“Back in Michigan. We’re at the United States Coast Guard Station” Ratchet announced, “Morshower advised it would be best if the Autobots remained here until you regained consciousness. Seems like Optimus Prime needs you greatly as we settle on this new planet.”

Taylor smiled a little. “That was a bit of a given” she commented.

Taylor unveiled the covering. She was wearing a white t shirt and camouflage pants. “Careful” Ratchet said again. Taylor chuckled. “At ease, Ratchet. Humans aren’t that fragile.” She wobbled, slightly, and stretched her limbs as far as she could. “Ahh! It feels good to stretch again!” She cried. She realized Daniel was giving her a funny look. “What? Do I have something on my face?” She wondered.

“Do you recall what happened after you crashed that Decepticon aircraft?”

Taylor thought for a moment. “Well…I remember Prime got shot by a cloaker…I ran to help him, but I was stopped…” Taylor rubbed her head, “It gets fuzzy from there. It was so dreamlike, I wasn’t entirely sure if it was real or not.”

Taylor could recall the emotions: Psychotic rage, anguish, pain, horror, sadness. But she felt uncomfortable divulging that information. It was humiliating. She wasn’t ready just yet. “Hmm…I see” Ratchet murmured. “Taylor…One of your eyes have changed color” Daniel stated. He pulled out his phone and faced the camera towards her. Taylor stared at it for a minute before taking the phone. Sure enough, when she looked at her reflection, Taylor could see her right eye’s iris had changed, from green, to a fluorescent blue. Taylor was unnerved. She looked back up. “What did I do?” She asked. “Optimus wants to arrange a meeting with you. He wants to be here when we discuss this” Ratchet responded, vaguely. Taylor raised an eyebrow. “Okay…” Taylor glanced at Daniel for a moment, then said, “Ratchet, can I speak to Daniel alone for a few minutes?” Ratchet thought for a moment, then nodded, “Alright. Just take it slow.” “Okay.” Ratchet quietly exited the hanger, leaving Daniel and Taylor alone.

There was awkward silence. Taylor sat back down on her bed and folded her hands. Then, she said, “So, I guess…This is probably a shock to you, huh?” Daniel didn’t reply for a moment. Taylor continued, “I’m sorry. I wish you didn’t have to find out this way. Honestly, I wasn’t sure how to tell you. You were one of the most trusted humans I knew. I didn’t like to keep secrets from you. But eventually, I came to the conclusion that I didn’t need to tell you. I truly thought I was the last…That is, until all this happened…” Taylor sighed, and bowed her head shamefully.

“You’re right. It is a shock” Daniel finally replied.

“The one whom I trusted…one whom I once called a lover, then a sister, is some kind of…cyborg.”

“I can maybe buy the fact that you’re a robot, but an alien…”

“You know they’re not dangerous…right? My friends?” Taylor asked.

Daniel smiled a little. “No,” he replied, “They’re alright. If you trust them, then I will too.” Taylor smiled.

“They’re back home. It seems Spike has been inspired. He’s toying with the idea of going to military school.”

“Really? Does he know how difficult that will be?”

“I understand that he does. I think he wants to be in the same field as you.”

Taylor chuckled. “He’s got a long way to go then…”

“For real? Wow, that’s awesome! I think the two will be a fine couple.”

Taylor stared out into the distance. “Yeah, I think so too…”

Daniel put his hand on hers. “Taylor…” Taylor looked up at him. “I want you to know, that whatever happens now, whatever you choose to do, Spike and I will support you in any way we can.” Taylor smiled, weight lifted off her shoulders when she heard that. “Thank you. I really appreciate it.”