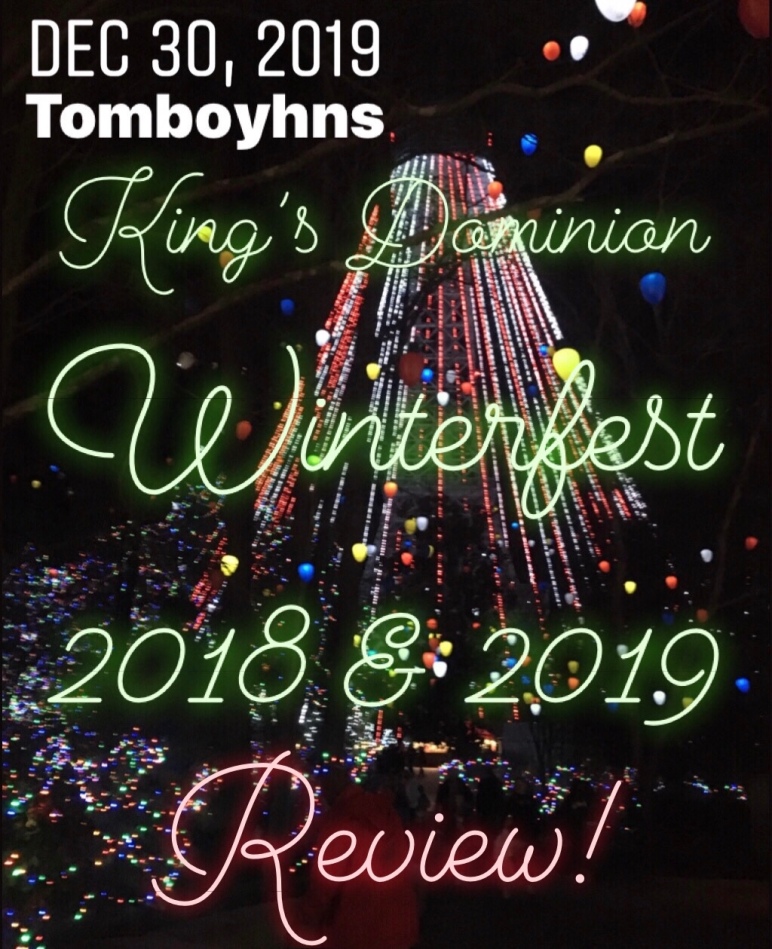 Well, another Christmas has come and gone. After two years attending King’s Dominion’s annual Winterfest, I am ready to review it for you guys! King’s Dominion has become a home away from home for my family and I. We took a short break and spent a Summer at Busch Gardens, Williamsburg. However, when King’s Dominion advertised an annual pass deal of not only the entire year of 2020, but also Fall-Winter 2019, my Dad couldn’t resist! So here we are, ready to discuss the wonder and awe of Wintefest while awaiting King’s Dominion reopening come Spring.

“…welcomes you with millions of dazzlings & lavish displays of holiday grandeur.” 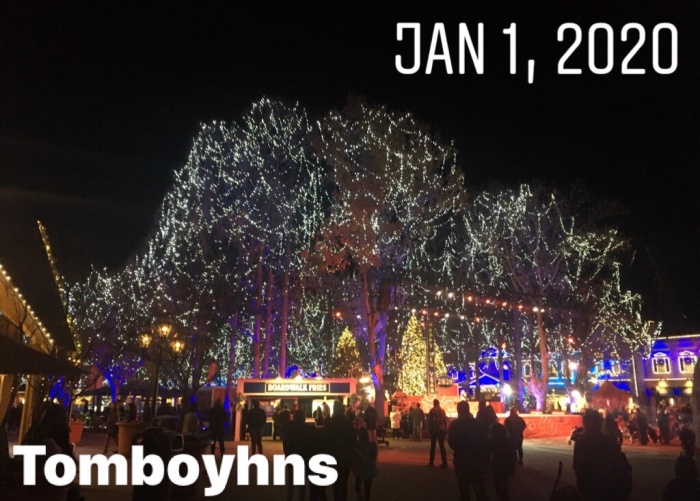 International Street is full of lights and wonder. Every shop is renamed to festive titles to commemorate the Holiday Season: There is now Blitzen’s Burritos, Blitzen’s Snack Nook, Prancer’s Festive Funnel Cakes, Piper’s Piping Pizza, and more! International Street also prides itself on recreating the whimsical wonder of Winter by raining fake flurries down on the passing guests.

International Street also provides Ice Skating on its center lake. There is a fee to skate, but it allows you to glide on the ice for an hour and a half! I did not participate, but my sister, brother, and Dad did. We are not experienced skaters, let alone ice skating, but my family members really enjoyed it. There are always employees patrolling, and will be happy to pick you up if you fall.

Don’t miss a chance to check out the local vendors! You will find them behind the Eiffel Tower on International Street, down Tinsel Town road, and through Old Virginia Christmas! My sister, mother, and I purchased several hair accessories from this wonderful lady next to St. Nick’s Pics in 2019, as well as two exciting skirts for next Halloween! We also bought a special family adornment for my grandparents in the 2018 season from another vendor. They were a delight to be sure! 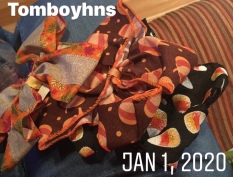 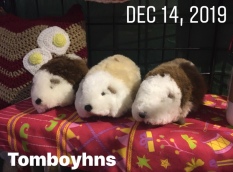 Despite the fact only one of my family members are young enough to participate in most Peanuts festivities, we can’t help but fall in love with Charlie Brown’s Christmas Town. Planet Snoopy is now illuminated with glowing colored light bulbs littered across the trees as if floating in the sky. 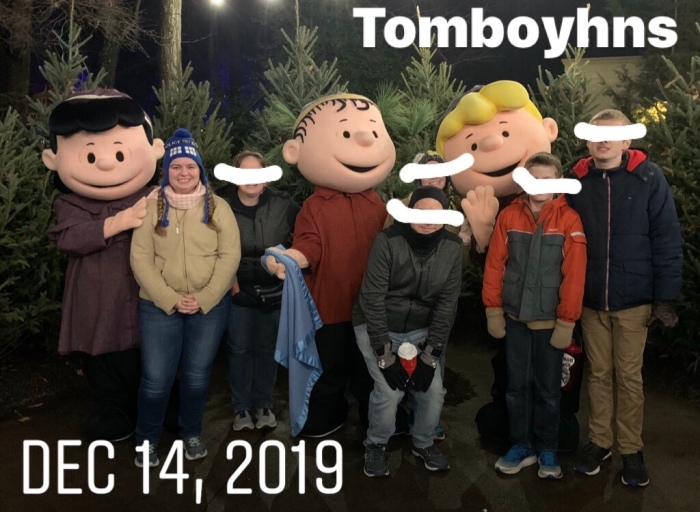 Want to fill your senses with the majesty of pine but can’t afford a real tree? Then come on down to Charlie Brown’s Christmas Tree Lot! It’s a small walk through attraction where at the end you get the chance to take pictures with your favorite Peanuts characters! We seemed to hike through the lot just in time for the character’s to switch out, so we always ran back through to take more pictures because we love the Peanuts so much!

Sally Brown’s Christmas Crafts is a great place to bring your kids for some hands on fun! Children 12 and under get to select one craft, ranging from Christmas cards, to stockings, to mugs, and color to their hearts content! Sometimes there will be live entertainment: an acoustic singer delighting guests with the classic Christmas tunes. The craft options are very high quality and would highly recommend it to any family!

A Peanut’s Guide to Christmas

Charlie Brown and his friends are delight to teach everyone step-by-step the best way to celebrate Christmas. Once again, the Peanut’s gang are incredibly charming and hilarious! Don’t miss a chance to see this show!

“…Fall in line and march through this alley of oversized toy soldiers standing guard to protect the secrets of Santa’s Toy Factory.” 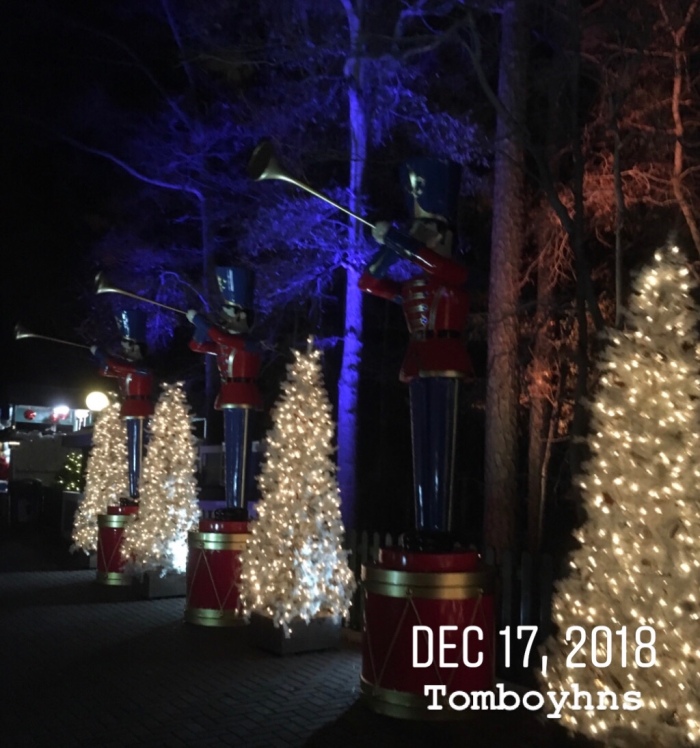 Toy Soldier Alley is a very small corner of Winterfest, but still a quaint delight! Don’t miss a chance to walk through the lines of Toy Soldiers as you proceed towards Winterfest Way.

Sounds of the Nativity

Sounds of the Nativity provides live entertainment throughout the evening, celebrating the most important reason for the season: Jesus coming down to Earth as a simple baby to eventually redeem us. It is very simple, but impactful. Also, don’t miss a chance to feed the live donkeys, goats, and camels! They may be smelly, but still fun! 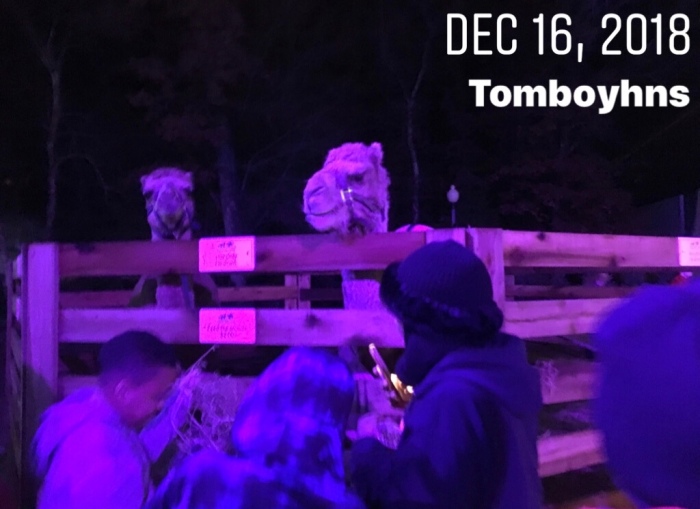 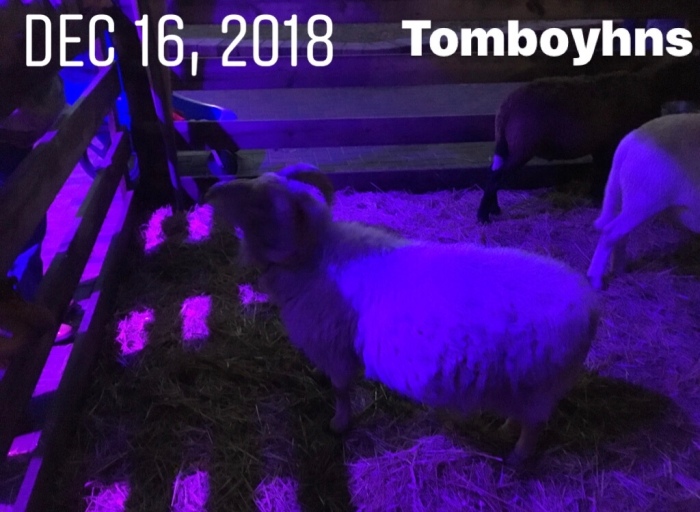 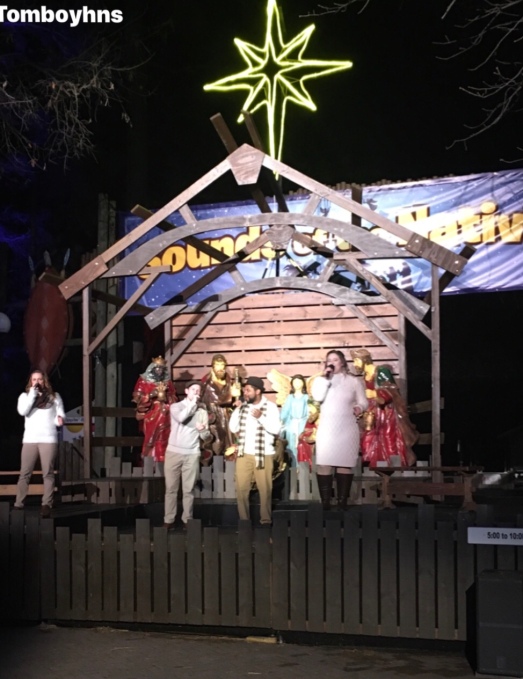 “…dazzles guests with millions of brilliant lights that dance to festive holiday music.”

The best part about Winterfest Way is that all the lights are in sync with Blue Christmas by the one and only Elvis, Tran-Siberian Orchestra, and more! A few attractions such as Dodgem, Bad Apple, and the Americana were still running for visitors enjoyment. However, the Racer ’75 (aka the Rebel Yell) was not available during the 2019 Winterfest season. Sad, but understandable.

Of course, Winterfest Way is home to one of my absolute favorite eating establishments at King’s Dominion, The Mac Bowl, known during Winterfest as Vixin’s Fixins. Vixin’s has mostly the same options, with the exceptions of seasonal additions, such as gravy and stuffing instead of tater tots and mac and cheese. Sorry Vixin’s, but I love my mac. If you’ve had gravy or stuffing at Vixin’s, leave a comment down below, I’m curious how it was.

Four Drummer’s Drumming “…puts the pa-rum-pa-pa-pum in Christmas.” This is the only show that we watched I believe needs a bit of improvement. When I first read about this show, I was imagining something like a professional marching band performing classic Christmas songs with percussion. That wasn’t entirely inaccurate, however, I wasn’t a fan of the remixed holiday music they played in tune with. Also, the music was too low to hear over the drums. I would instead recommend the roaming Blitzen’s Brass Band for a more fulfilling experience.

“…a delightful walk on the sweet side with larger-than-life decor that’s perfect for a family photo.” 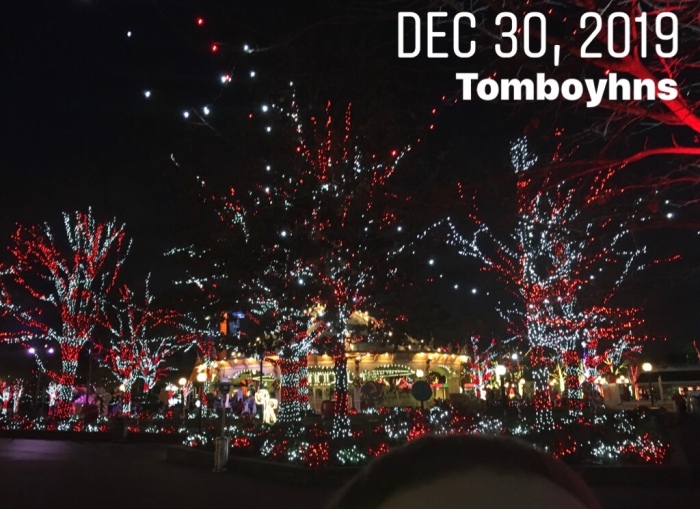 Another small corner at Winterfest, but a great opportunity for several photo opportunities! You will also find many Winterfest characters roaming about. Don’t miss a chance to take pictures with them! 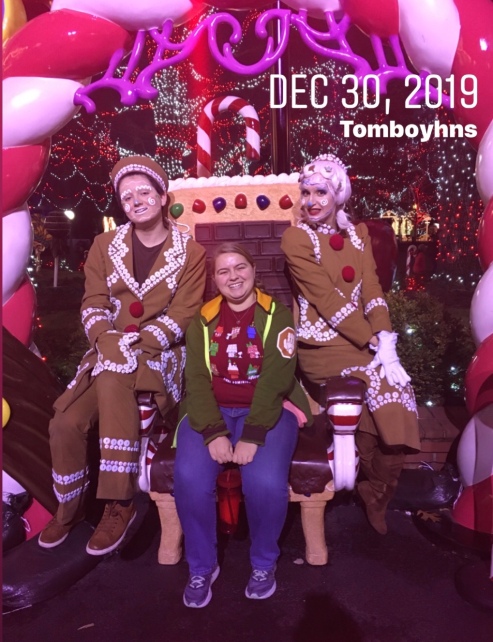 We went to Classic Christmas Cafe in the 2018 Winterfest season, and got ourselves a traditional Christmas Dinner platter. That year, we had no stuffing, so to have it at the Cafe was certainly a treat! We don’t often go to the Country Chicken during the year, but was a pleasant visit in the Holiday season.

“…the hot spot for cool interactive games, family fun, and selfies with the Coca-Cola Polar Bear.”

Coca-Cola Polar Bear Plaza is another close quarter at Winterfest. An additional photo opportunity area with a DJ playing the top pop hits of the past decade at the Coke Polar Party! 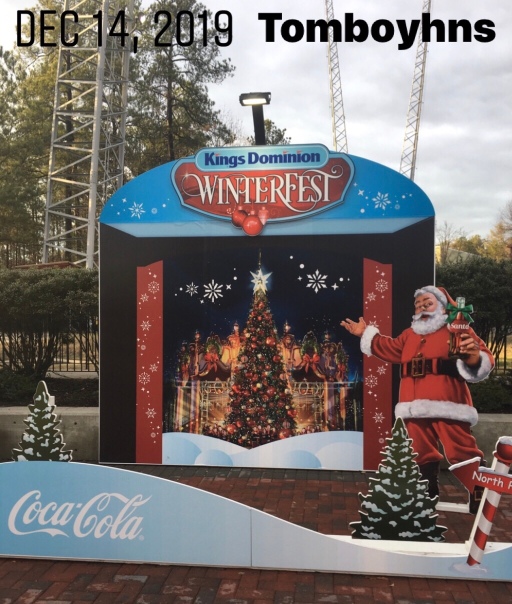 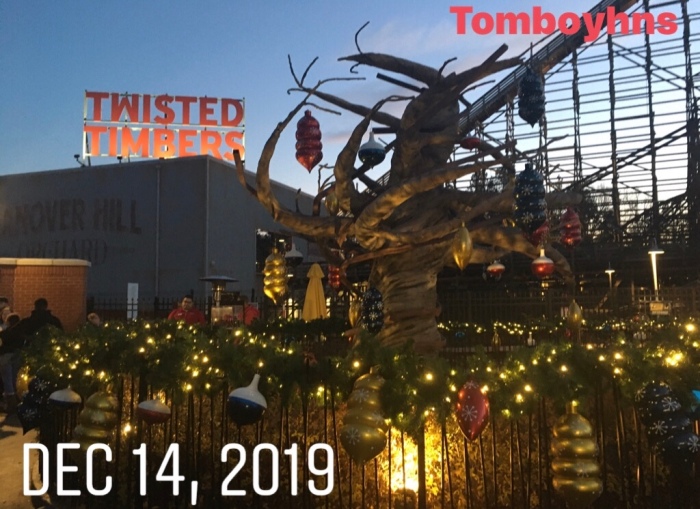 Blitzen’s Burgers is another one of my favorite places to eat, called Jukebox Diner during the rest of the season. It is also home to a new entry on my list of favorite meals at King’s Dominion: the Donut Burger. A new edition during the 2019 season, we had this meal twice. The first time the icing on top was arranged in wavy lines, the second time it saturated the bun, which provided an even better experience than the first! We chose to eat it pure, without any toppings besides its cheese and bacon. Because we have six meal planes, we got three with onion rings, and three with french fries, and split the two sides. It was a heavenly experience! Don’t miss a chance to eat this amazing meal in the 2020 season if it should return!

I was so sad to miss an opportunity to see the Mistletones perform during the 2019 season, but we did see them in 2018. The Mistletones sing and dance to Christmas songs we all know in love, but in the style of the 1950s. Cheery and joyful, the Mistletones are a treat to see! 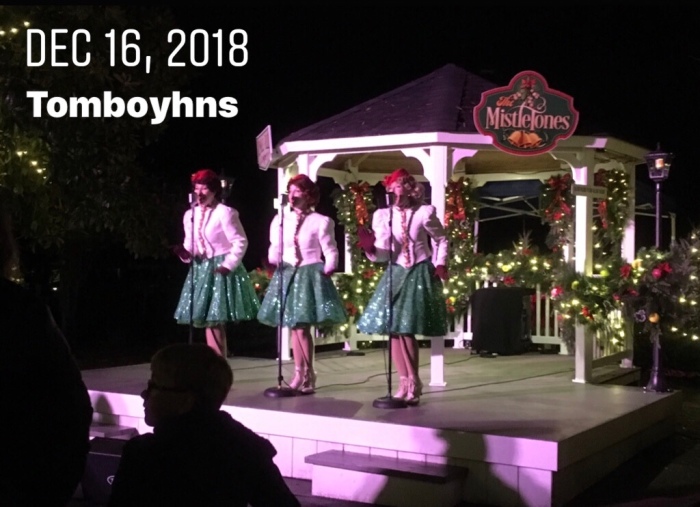 The Holly Jolly Trolley already stands out from the rest by arriving on a cute, sparkling red trolley. And from there, it’s nothing but delightful renditions of the “Polar Express,” “Baby, It’s Cold Outside,” “Home for Christmas,” and more! In the 2019 season, my sister was chosen to participate in the show and received a red nose and antlers. It was a memorable moment during her holidays to be sure. 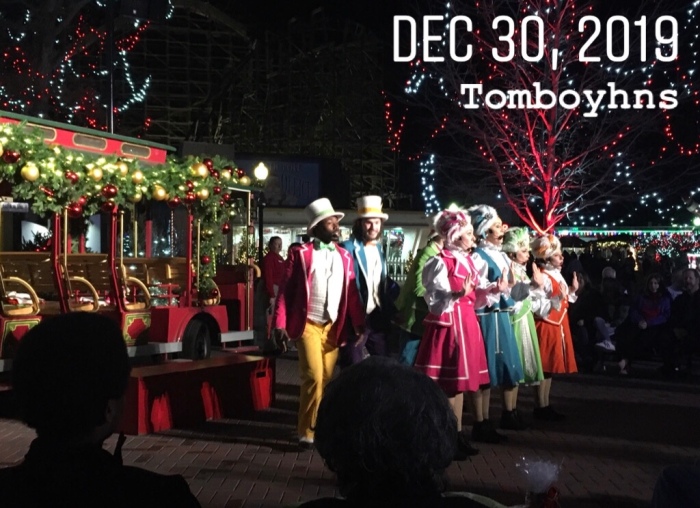 “…transports you to heart-warming holidays of yesteryear with traditional sights, sounds, and experiences.”

Old Virginia Christmas has probably my favorite lights display next to Charlie Brown’s Christmas Town. It’s so warm and inviting and envelopes itself in the country magic of Virginia. 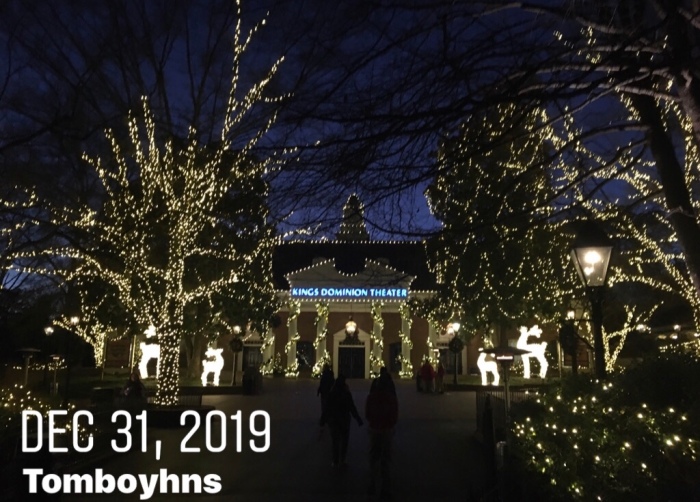 Haven’t taken your kids to sit on Santa’s Lap yet? Well Santa is paying a visit to Winterfest at St. Nick’s Pics. This recreation of Santa’s Workshop includes many throwbacks to toys of bygone eras, and are fun to spot while standing in line to see Santa. If you visit after Christmas, and Santa has gone on vacation, then the Bellshnickels and Santa Snoopy will pop by to take pictures. Watch out for those Bellshnickels, they are quite the schemers, and will plant clips on you if you’re not careful! You will have to pay for a photo package in order to save your photos to Funpix, unlike Christmas Town at Busch Gardens, which is a bit of a bummer, but understandable. 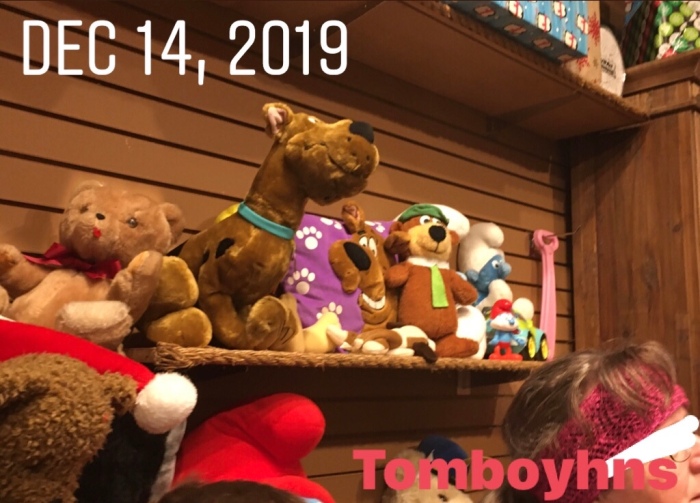 Lucy Van Pelt singing “Santa, Baby” alone is worth a visit. This is one of my favorite shows. Not only is it a chance to warm up from the cold, but it’s another excuse to see the Peanuts Gang in action! Don’t miss this delightful performance!

Jingle Jazz is an completely acoustic performance. This is another opportunity to be part of the performance. I was able to participate in both the 2018 and 2019 season. It’s a very simple concept, but it is so fun!

Bells and Beaus is even more simplistic and stripped down than Jingle Jazz. No one even sings, it’s bells being gracefully swung to create a beautiful composition. It’s quiet, but you can still hear clearly over the hustle and bustle. Bells and Beaus alternate performances with Jingle Jazz, so stick around!

“…Flash-back to retro time in the 50s world of Tinsel Town.”

There is not much in this zone, but the display of Tinsel and lights are still an enjoyable experience! 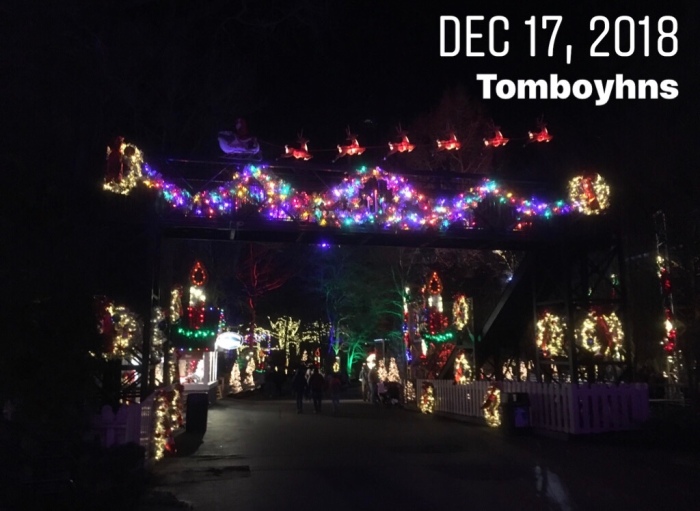 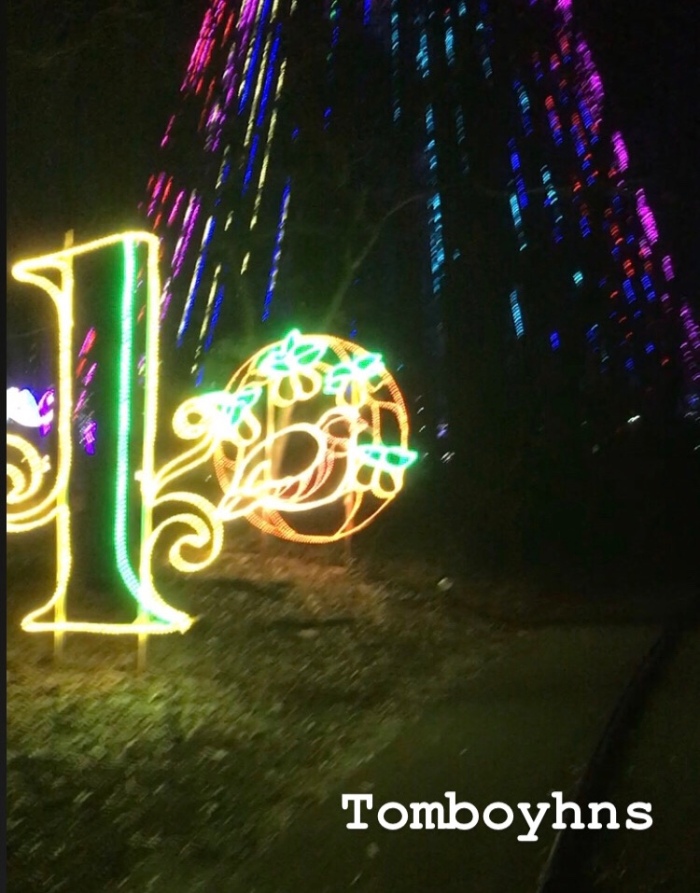 Blue Ridge Tollway is switched up during Winterfest and becomes a quaint ride through the 12 Days of Christmas. Sometimes Burl Ives will be singing through the 12 days, other times the Muppets will make an audible experience. Don’t miss a chance to ride this attraction. 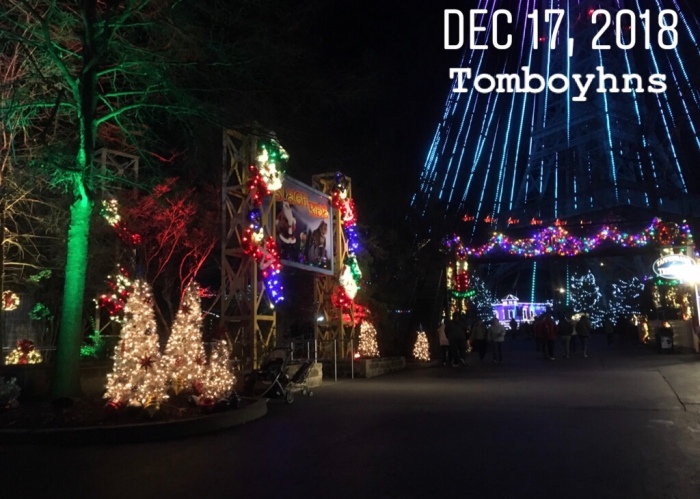 Whether or not you will enjoy the 3D Sleigh Rise is based on personal taste. If you’re looking for a chance to warm up, and a few chuckles, then you will enjoy Sleigh Rise alright. I personally don’t care for it too much, and would rather see another show twice than this.

This path is for the purpose of getting to Candy Cane Lane, Winterfest Way, and Coca-Cola’s Polar Bear Plaza much faster from International Street. Jack’s Frost Zone has more photo opportunities, as well as additional chances to take pictures with Winterfest characters. 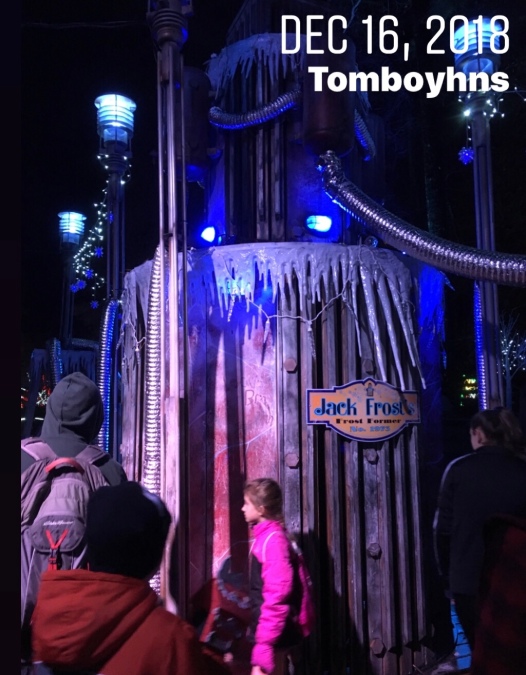 There are even more photo opportunities, shows, and places to eat that I either didn’t experience, or chose not to mention. Enjoy Winterfest for yourself and create your own memories for you and your family!