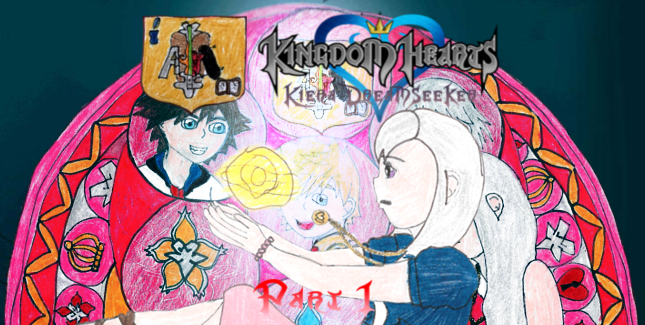 The Honor of a Gorilla

The Heartless hung back and crunched into a ball. Sora, Kiera, Donald, Goofy, and Tarzan sprinted towards him to finish him off. However, before they could, the Heartless turned invisible, and banished from sight. Kala reappeared and ran to Kerchak’s side. Kerchak shook his head and slowly regained his senses. He stood. When he saw the strangers, he growled, threateningly, showing a small bit of his razor sharp teeth. Tarzan stepped forward and spoke to the mighty silverback in a humble manner. Kerchak seemed to calm, but he scowled at the strangers, huffing irritably. Kala spoke to Kerchak, in a quiet, but insistent manner. Sora, Kiera, and their friends watched them, puzzled.

“Uh, are you getting any of this?” Goofy asked in a low voice, leaning over to Donald.

“Not a thing” Donald replied.

“But if Kala’s his mate, and Kala’s Tarzan’s mother, doesn’t that mean Kerchak is Tarzan’s dad?” Sora inquired.

Kiera observed Kerchak’s stern, and almost heartless look at Tarzan. She shook her head a little.

Suddenly, Kerchak glanced at Kiera. Kiera froze as his bright yellow eyes stared into her soul. He slowly approached her. Sora, Donald, and Goofy backed away, intimidated. But Kiera didn’t move. Kerchak was now a foot away from her face. Kiera’s heart raced. What did he want? Then, Kiera had an idea. Cautiously, she got down on her knees, and bowed lowly to him, attempting to show respect.

“And maybe if I stay perfectly still, he won’t hurt me. Like a bear” she thought.

He was now inches away from her face. Kiera closed her eyes, feeling his hot breath. Then, he grunted. He backed away, and went back into the shrubs.

Kiera blinked. There was a long minute of stunned silence as the group slowly took in what just happened. Tarzan has a sad expression on his face.

Then, Kiera asked, “Tarzan, what was that all about?”

He glanced up at Kiera, with a slightly hopeful look.

“Kerchak thanks you” he replied.

“For protecting my mother.”

“Um, excuse me, are you, Professor Porter?” Sora asked.

The old man stopped shivering and looked up. He saw Tarzan and Sora bent over him.

He got back onto his knees and stood up.

“That was marvelous! Absolutely marvelous! A giant chameleon and a gorilla at last! It’s a shame I caught them at a bad time…”

“Oh, by Jove! You speak English!” He declared, “Well, yes, I’m feeling quite alright my dear. Eh, thank you, for coming to my rescue!”

“Jane’s been worried about you. We need to take you back to the camp” Sora stated.

“Oh, poor Jane! I’ve had no intention of frightening her. Yes, I shall go at once!” Professor Porter exclaimed.

“Thank you so much for finding him!” Jane cried in delight when they arrived back at the camp, “I am in your debt!”

Just then, Tarzan started speaking gorilla. He was repeating the same phrase in gorilla he had before.

“You keep saying that. What does it mean?” Sora asked, now a bit annoyed.

“You mentioned it had something to do with Riku and Kairi” Kiera added, “Do you know where they are, Tarzan?”

“Come” Tarzan said, gesturing towards the exit of the tent, “Jane, come too.”

“Oh, Tarzan are you sure? I have to tend to my father-“ Jane started.

“Oh, I’ll be quite alright with Mr. Clayton, dear. You go on with them. I know you’ll be quite safe with Tarzan!” Prof. Porter declared.

Jane glanced at Tarzan, and blushed a little.

“Well, alright then, if you’re sure.”

As the gang departed the tent, Kiera caught a glimpse of Clayton, who was standing in the back corner, cleaning the barrels of his gun. He was glaring at them. Kiera quickly turned away, and followed the rest outside.

The keyblade gang followed Tarzan, miles away from the camp in the bamboo fields, and through more thickets of green bushes and solid vines. Kiera and Donald were spending most of it swatting flies away. Finally, they came to a little grotto. It was dark, and had little-to-no difference from the rest of the jungle.

“Is this what you wanted us to see, Tarzan?” Jane asked.

Tarzan nodded. He seemed to be waiting for something. Then, Kiera noticed a warm blue glow descending from the canopy and towards the ground. They were butterflies. It started out as five or six, then it became dozens upon dozens. Soon, the greenery of the jungle was covered head-to-toe in beautiful luminescent butterflies.

“The waterfalls… They’re echoing all the way here” Jane observed.

Kiera reached out her hand as one fluttered towards her and landed on it. Her eyes widened with delight.

“I can’t believe something as beautiful as this could exist!” she whispered.

“I wish my Light Friend could see this…”

“This is your home?” Sora asked, “But that means…”

Just then, a large cluster of butterflies began to shine even brighter. It grew brighter, and brighter, to the point of blindness. Finally, the light ended. In the place of the butterflies, was a shining outline of what looked like to be a keyhole. Kiera grew excited.

“It’s a keyhole! That’s what Leon was talking about, wasn’t it?” Kiera asked.

“Oh, so that’s what he meant…” Sora said, with a slight hint of disappointment.

“Well, you have the Kingdom Key, Sora” said Kiera, “You should go ahead and lock it!”

Sora pointed his keyblade at the keyhole with both hands. A light, of sort of starlight magic emit from the keyblade’s end. Then, it flew from the blade and struck the keyhole. There was a golden shimmer, then, the sound of a switch. This world’s keyhole, had been closed.

“Well, I guess we’d best be off!” Sora announced.

“It was such a pleasure to meet all of you,” said Jane, “If you should ever be in London, come and call for my father and I!”

“Thank you Jane! I hope everything goes well between you and Tarzan!” Kiera exclaimed.

Jane’s eyes widened. Tarzan have her a soft look, which caused Jane to blush hard and chuckle nervously.

As the team headed back to the Gummi Ship, Kiera suddenly was blinded. She covered her eyes, and noticed something metallic reflecting off the light. She glanced at her friends, then hurried over to curiously uncover it.

It was some kind of armor piece, rusted, muddy, and cracked. She examined it, curiously, and rubbed her fingers over it in a feeble attempt to clean it.

“Why does this look so…familiar…?” She wondered.

She looked back at the peculiar artifact. Then, decided to keep it.

“Maybe someone in Traverse Town will know how to fix it.”