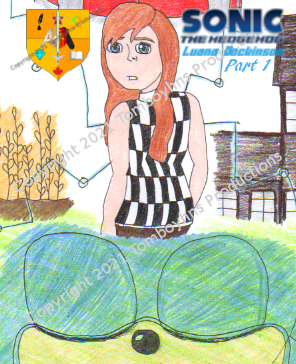 I disabled the force field, and Sonic was able to follow me back up the stairs. It was getting late. I wasn’t going to have time to make any elaborate meals, so leftovers it was. Sonic observed the house while I began pulling stuff out of the fridge. He snorted.

“Geez, How long did it take for you to collect all this junk?” Sonic inquired as he sped up and down the hallways.

“It’s not junk, they’re antiques” I corrected, “and I didn’t collect this stuff, my grandpappy did.”

“And you didn’t get rid of it when he left?”

Suddenly, there was a loud gush of wind. The front door had flown open. I whirled around. Then there was a cry from out in the yard. I put a can of beans onto the counter and ran outside. There was Sonic, frozen in place once again from the bracers, and the red lights flickered on.

“I figured you would try to run. Those bracers worked,” I sighed calmly, “Some deal you make.”

He struggled up and down to get them off.

Sonic groaned as the bracers were deactivated. He landed on the ground by his feet.

“I can handle myself! I don’t need a bodyguard” Sonic insisted.

“You may think you don’t. But the world has changed since you went to sleep!” I explained, harshly, “There are evil people that will want nothing more than to lock you up again! And I don’t want that!”

“Heh, you would be surprised how little it does,” Sonic rebuttled, “I’ve beat bad guys of every kind. Nothing can stop me. I’m too fast!”

I marched up to him. I wanted to be angry. His arrogance and reckless talk enraged me. I took a deep breath.

“I know you don’t believe me, but I have your best intentions at heart…!” I breathed.

I could see my baring eyes in the reflection of his.

Sonic’s expression softened, but only a little. Then, he responded through his teeth, firmly:

Once again we met each other’s eyes. My face softened. Then, without another word, I went back inside the house. Whether it was out of a thought of further rebellion, or if he really took my words to heart, Sonic begrudgingly followed shortly behind.

“So, what do South Islanders usually eat?”

I proceeded to pull out more items from the fridge: fruit, veggies, sandwich meat, bread, and other kinds. It was when I pulled out the hot dog weiners, that Sonic’s eyes brightened.

“Er, well, usually…pretty much anything Overlanders can eat, but…”

His eyes darted at the food then back at me, and sighed dreamily.

“I haven’t had a good chili dog in years…”

I glanced at him. His expression turned to one of a child, a gentle pleading face for something sweet. I couldn’t help but smile.

“What? A chili dog?” I scoffed in disbelief.

I chuckled. “No, not at all. I just wasn’t expecting a person such as yourself would want something so…”

Sonic scoffed and put his hands behind his head.

“What can I say? I have a high metabolism!”

I chuckled again, quietly. He seemed to notice, as he held his glance on me, a smile creeping across his face. I decided to open a can of chili, and put four hot dogs into a frying pan.

Sonic’s eyes lit up with joy when I passed a plate down to him with two chili dogs. Looking at them made my chest hurt, so I settled on a regular sandwich. He looked at me, then promptly dove in. I shot quick glances in between bites. It also made me a little sad. He looked like he hadn’t eaten something in years. What has he been fed when he was in captivity?

“So, I noticed those certificates upstairs. What are they for?” Sonic asked.

I straightened, taken aback. I didn’t know he had made it up the stairs to look at anything.

“Oh. Those were just stuff I got while doing theater. Grandpappy insisted he hang them up. Though, they were nothing more than glorified participation awards.”

“Does that sound strange?” I inquired.

“No. That just wasn’t what I expected. So, you’re an actress?”

“And lighting director and costume designer. Theater was a passion ever since I was little,” I explained, “I performed at the theater in town for thirteen years before heading off to grad school.”

I shook my head.

“No, I never wanted to be in Hollywood. I prefer the small, quaint theaters, where there’s more heart and soul thrown in. I’ve never really been a city gal.”

Just then, Sonic thought of something.

“July 2050. Almost every town in the country has converted to high tech. Lahren County’s probably one of the last little towns that haven’t received it.”

“This is a county? There’s nothing but wheat fields!”

“I’m surprised you know what wheat is, being a different species and living on an deserted island and all.”

“Hey! I may be a speedy hedgehog, but I’m not stupid!”

“Well, this house is actually about five miles outside of town. The wheatfields belong to Grandpappy’s son, my grandad, but he sold it to a local farmer ten some years back. But I still have the land around the house.”

I leaned back in my seat.

“I happen to like being far away. It’s quiet, it’s peaceful…I always did my best thinking here…”

Sonic glanced out the window.

“Oh yeah! It’s great!” Sonic responded, excitedly, “It’s mostly just green hills, always perfect for running! There’s a volcano on it too! But I don’t go to that part of the island very much; and there’s a jungle, and beaches…!”

“Yeah…I haven’t been there in a long time, even before I was…”

Sonic’s voice trailed off. His face fell, and he grew sad again.

“I wonder how all my friends are doing…” he mumbled, I wonder if she…”

He glanced over at me. I frowned. Sonic hastily changed the subject.

“I was traveling the world for a while! As much as I love home, I gotta expand my horizons and find adventure in other places!”

“I see…” I looked away, “My friend has been wanting me to travel with her for a while, but I’ve politely declined for now…”

“You should never be afraid to try something new! Life’s too short not to explore.”

I glanced back over at him.

“You know, I actually wouldn’t mind seeing the California Coast…”

I smiled. He smiled back, more authentically then before. Then, we turned away from each other.

“So, whaddya do after you eat?” Sonic then inquired.

“It depends. Usually I have a costume to put together or mend for the performing arts studio.”

I gave him a side-eye.

“Well, there’s a game console hooked up to the television in the living room. You could give that a go while I get some work done.”

“Really? What does it have?”

And with that, Sonic promptly vanished, leaving his empty plate on the counter. I smirked and grabbed the plate to toss into the sink. As I trekked upstairs, I heard the console boot up, and heard Sonic say:

I got through about two costumes before I heard:

He raised his eye, then chuckled.

Even though Sonic’s fingers flew across the countrols, the game couldn’t react fast enough. I won two out of three rounds.

“Well, that’s enough. I gotta go to bed” I decided.

“Aww really? I was just about to toast you!” Sonic groaned.

“Sorry pal, but I got places to be tomorrow. Come on, I’ll show you the spare bedroom.”

Sonic was disappointed and sulked for a moment. I gestured to him softly.

Finally, he hopped off the couch and followed me at regular speed up the stairs. After advancing down the upstairs hallway, first door to the left was the spare. It was one of the only rooms in the house that was relatively clear of clutter. I sighed, relaxing my shoulders.

“This will be your room” I announced, “I’m right next door if you need anything.”

Sonic hopped on the bed in a childish manner. He seemed surprised the bed was so soft.

“Wait, what if my bracers lock up while you’re sleeping?” Sonic inquired.

“I hope not,” I responded sheepishly, “I’m really sorry.”

Then I had an idea.

“We could test it tomorrow more thoroughly, then I can figure out how to make you more comfortable.”

Sonic glanced at me. His expression softened again, a little surprise, and a small sense of longing.

I nodded. I walked halfway between the doorway and put my hand up on the molding around it.

Sonic opened his mouth to say something. But hesitated, and turned away. I frowned. But I didn’t react. I simply flipped the switch to turn off the light, and exited the room.

I didn’t sleep well that night. It was more out of excitement than anything. But I was also concerned. In the middle of the night, I got out of bed and peeked into Sonic’s room. His shoes were sitting neatly at the foot of the bed, and he was deep in the white sheets. He was quiet, and peaceful. My heart ached, and I shuddered. I wondered what he had gone through all those years ago, how much he had truly taken to heart, and if I managed to ease any of his pain…