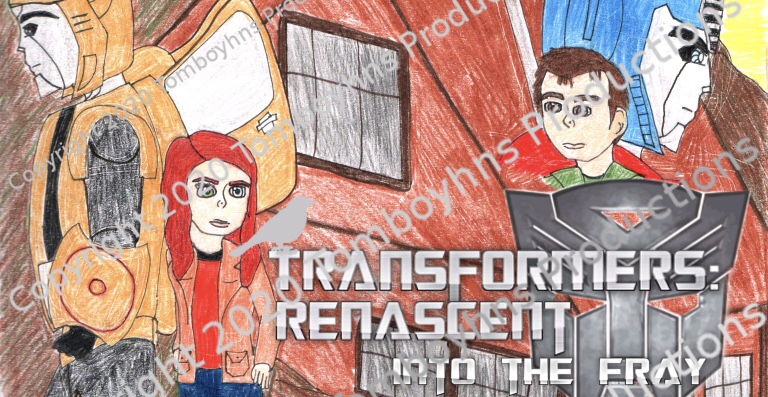 Nightshock let out and unexpected cry and fell down. Iris jumped to her feet and fired at the tall robot. Taylor and Bumblebee whirled around but before they could see what happened, the Decepticon vanished. Alarms blared throughout the facility.

Bumblebee ran back inside the security room to aid Nightshock. Nightshock rolled herself back over. Dark blue liquid poured from her wound. Iris stood behind her, showing a glimmer of concern. Nightshock grunted in pain as she clutched the wound. “Be still!” Bumblebee warned.

“Scrap!” Taylor exclaimed, smacking her head in frustration, “Soundwave is Megatron’s chief security officer. Of course he’d be skulking about!”

She pressed the commlink in her ear.

“Wadewatch, Major, get in here now!” she ordered, “Roadshot, Hamilton, Hotline, Dakota, clear the way for them!”

Hotline moaned quietly, but quickly followed the soldiers back through the way they came.

Lennox, along with Hotline, Dakota, Wadewatch, Marie, and his team, charged inside the Nemesis, guns blazing. His men covered the medics as they dashed to attend to their wounded comrade. Dakota managed to shoot down five drones, but Hotline barely managed to eliminate one.

Dakota growled. “Look, this isn’t a matter of whether or not you can do this! This is a matter of life and death!” She faced him with fiery eyes, “If you want to live, then stop telling yourself you’re going to fail!”

Hotline froze at her shouting, then gulped and nodded. He searched for the mental commands to reload his weapons. Once he figured it out, he took a deep breath, and began to concentrate. A Decepticon was charging towards him with a mace. Panicked, Hotline ducked, then fired his blaster subconsciously. The Decepticon was shot through the chassis and promptly crumbled to the ground. Hotline froze for a moment, shocked at what he just did. More were coming at him. Then, Dakota ran in front of him and threw a backpack far into the swarm of drones. A few seconds later, the pack erupted into a fireball and the ‘cons were expunged. Hotline stared at Dakota in awe. Dakota turned around, breathlessly, and said to him.

The rest of the team broke off from Wadewatch and Marie, who managed to find the security room and attend to Nightshock. Wadewatch bent down and examined her injury.

“She’s losing fluid rapidly” he observed, “We need to get her back to base, fast!”

“We can’t give up! We’ve got to get those plans!” Roadshot exclaimed, “We won’t get another shot at this!”

Taylor tried to think of something quick to solve their dilemma. Nightshock was the only one in Red Delta who could quickly and effectively hack through a database. Or was she?

Taylor then pressed the commlink in her ear. “Hotline, Fisher, I need you up here now!”

Bumblebee scoffed in disbelief. “ ‘Gale, I know what’s your doing. How’s Hotline going to find what we’re looking for!?”

“Just trust me on this one, Bee” Taylor replied.

Dakota and Hotline plowed through a dozen Decepticons before they finally met up with Taylor and Bumblebee.

“Hotline, I need you to go through these files-,” Taylor ordered, pointing at the computer, “-and find the energy conversion blueprints we need!”

“You have more experience than any of us here! Find those blueprints!”

“But Captain I was always kept out of the way so I wouldn’t ruin anything! You can’t trust me to do this!” Hotline insisted.

“Too late for that now” Taylor replied. She pressed her ear piece, “Lennox, we’ve got wounded incoming. Roadshot and Hamilton, I need you to cover for Wadewatch and Marie as they get Nightshock out. Bumblebee, Fisher, and I will cover Hotline!”

Hotline whimpered silently to himself, staring at the keyboard for a moment, his mind going blank on what to do.

“Hotline, you can do this! Just focus on what you need to do. I’ll make sure you stay safe!” Dakota assured.

Hotline nodded, smiling nervously. Then, he began tapping on the holographic board, scanning as quickly as he could.

Roadshot and Hamilton returned to the security room after cutting through cons. Wadewatch pulled Nightshock’s right arm over his shoulders and pulled her up.

“Easy does it!” He grunted, but softly.

“The Decepticons are a little difficult to get through. You’ll have to make your way out on your own!” Lennox informed.

Roadshot unsheathed a large steel hammer from her arm.

Then, with a battle cry, she flung herself into the crowd of Decepticons. She knocked them over like pinballs, and bashed others on the head. Her orange painted dreadlocks flew through the air as she whirled this way and that. Hamilton continued to fire any Decepticons that Roadshot damaged, but didn’t quite finish off. Bullets echoed through the hall and the light of the gun flashed. Wadewatch began to run ahead with Nightshock while Marie trailed behind him with. Hamilton and Roadshot pushed forward, preparing the way for them. Finally, the teammates made it outside the Nemesis. Lennox and his team kept the Decepticons from progressing closer towards them.

“We managed to call a submarine in to help,” Lennox inferred, “You have your propulsion packs equipped?”

Wadewatch nodded. Marie re-attached her pack to his chassis.

“Okay, okay, I think I got something!” Hotline exclaimed.

Bumblebee and Taylor took a step back as the amount of Decepticons began to grow. Then, Hotline exclaimed panicked:

“Aww, there’s a encrypted code keeping me from getting in!”

“Can you crack it?” Taylor asked.

In the distance, he could see a familiar face. A tall, slender Decepticon with red eyes, red paint and broad shoulders, stood at the end of the hall. The ‘con drew a cylinder object, which turned into a long, spiked staff.

“Where are you going?” Taylor cried..

“Just trust me. That ‘con cannot be allowed to come near the security room.”

“Oh-ho no! I’m not leaving you! Whatever bone you got to pick with him, I’m going with you!” Taylor exclaimed.

Bumblebee opened his mouth to begin to argue, but then he remembered he and Taylor’s argument hours before. He sighed.

“Corporal, once we leave, seal the doors. Don’t open it for anything or anyone until you’ve got those blueprints.”

Bumblebee and Taylor stepped into the hallway. A disk ejected from Bumblebee’s lower right arm and enlarged into a golden shield with the Autobot symbol shining in bright red. From his back, his glowing Energon sword popped out and Bumblebee grabbed it from his other hand. Multiple Decepticons drew their sharp, skewered clubs and maces, and started charging towards him. Bumblebee deflected the lasers with his shield and even caused some to bounce back and blast the ‘cons to bits.

“Step aside troops,” commanded the red Decepticon, “The scout is mine. Smite the others.”

“Well, well, well, if it isn’t Bumblebee, Optimus Prime’s favorite little scout. It’s been a long time” he then said in a smooth, cool tone.

“Captain Knightingale, I don’t think we’ve officially met. Knockout, at your service,” the Decepticon introduced, “So, this is the femmebot who’s got a hand on your leash, eh Bee? Oh wait, you’re not a femmebot anymore, are you? Just a flesh creature’s experiment.”

“Don’t talk about her that way!” Bumblebee snapped.

“You know him?” Taylor asked.

Knockout scoffed. “You think you’re the only friend your pet here ever had?”

“I’m not a pet, Knockout! I’m giving you one chance to surrender now! I don’t want this to get ugly.”

Knockout scoffed again. “What, you’re resolving to peace now? You and your little revolution? I think we’re too many quartexes too late for that.”

Knockout changed his posture into a fighting stance.

“By the way, taking energy conversion blueprints that isn’t yours? That’s really rude.”

Bumblebee growled as he charged at Knockout. Knockout deflected Bumblebee’s Energon sword, and flipped his staff and smacked Bumblebee in the face with it.

“Alright, let’s see what this new suit can do!” Taylor exclaimed.

In addition to her new suit, she had a pair of bullet-proof glasses that allowed her to automatically activate her weapons and other abilities.

Suddenly, Taylor kept up in the air and soared thirty feet in the air. She converted her blaster into a blue Energon sword and sliced Knockout in the back. Knockout grunted and tried to knock her off, but Taylor backflipped before he could take a swipe. She turned the sword back into its blaster mode and fired. Bumblebee distracted him away from her by continuing to slash his sword.