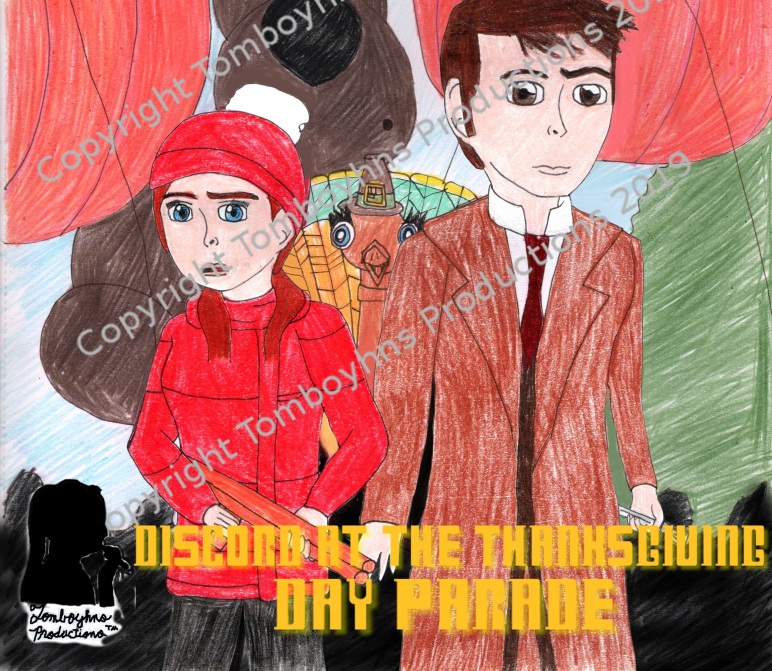 Piper woke up suddenly as she heard a roar through the crowd. She shivered a little from the cold and looked around. The ribbon for the Macy’s Thanksgiving Day Parade had been cut. The high school marching bands blew their horns and banged their drums and tambourines. She checked the clock. 9:05am. She looked over at her uncle. The Doctor was trying to balance his formally sleeping niece on one arm, and finagling with a detector in another. Piper sat up and stretched her arms and legs.

The Doctor studied the radar for a few seconds.

Piper pulled out her thermal mug of coffee and began to sip it. Instantly, she felt warmer. She checked her watch again. 9:10am. They had a little over an hour left. Piper watched the Hello Kitty balloon hover by, along with a snowy wonderland themed float go shortly behind it.

“So when I see the Spiderman balloon go by, that’s when I should start worrying…” Piper observed.

She wondered how they would stop these trolls. If they weren’t from Earth, then most likely anything humans had recorded about stopping them would probably be thrown out the window.

“Then again, all the Vikings really did was come at them with swords and battle axes, not exactly superior intellect…”

Piper looked up at the Doctor. He was now holding a second device, which was beeping madly. Where in the world did he get most of these devices? Out of his pockets? Oh wait, bigger on the inside technology, of course.

“What? What is it!?” Piper asked, almost excited.

There was a moment of silence as the Doctor was analyzing the readings. Then he stood up.

“Teleportation. Someone or something has been teleported back on 68th street!” The Doctor announced.

She slipped the sealed thermal mug in her pocket, and jumped up.

“We can’t use the Tardis. It’ll either scare them off, or threaten them” the Doctor added. In the back of her mind, Piper didn’t like the idea of trekking more than twenty minutes back to 68th street. However, she grabbed the Doctor’s hand.

“Then we better start moving.”

After the struggle of putting the devices back in his pockets, the Doctor and Piper soon took off at full speed down the road, past the floats and ecstatic crowd.

Piper was exhausted by the time they had arrived at their destination. She was huffing and puffing to keep up ,and even had to stop halfway through because she couldn’t feel her legs. At least she wasn’t cold anymore. When they finally arrived on 68th street, aside from the crowd cheering on the side of the road watching the parade go by, there was nothing out of the ordinary. The Doctor pulled out the radar.

“There’s a trace of residue left from the teleportation” he observed, “It’s not very strong, so it must be coming from somewhere close by.”

Piper sighed as she finally caught her breath. The Doctor glanced over at her and raised an eyebrow.

“You alright?” He asked.

“I guess whatever fitness I had before regeneration, is back to square one” she wondered.

The Doctor started slowly advancing forward, following the radar as it began to beep faster. Piper followed. He turned down an alleyway, where trash was everywhere and there were burning barrels with people dressed in rags around them. Piper gripped the Doctor’s coat nervously when some of them began to stare. The radar began beeping louder as they neared the end. Then, it beeped rapidly. The Doctor stopped. He glanced forward. Ahead of them was a brick wall. Dead end.

He took out his screwdriver and began to scan the area. Piper observed him.

“Something was definitely teleported! And it wasn’t human…”

Just then, Piper heard a noise: a crashing of garbage cans. Piper turned around. The people around the burning can were still there, but they were looking around curiously as well. Piper was about to say something to the Doctor, but he was so deep in his concentration, that Piper didn’t want to bother him. Clutching the sonic screwdriver in her pocket, she slowly advanced towards where she heard the sound. It didn’t take long to see three large bins in the alley, formerly closed, to dumped over. She inched closer. She heard rustling. She froze. It was coming from inside. She took a step closer. The bin started to shake. Piper leaned forward to look inside. Suddenly, a small, chubby humanoid, muddy brown and twigs entangled in its hair, sprang from the garbage bin. Piper yelped as she jumped back, tripping on a metal can and falling on her rump. The Doctor snapped out of thinking when he heard her scream.

He ran over to her side and quickly pulled her up and away from the creature. The Timelords’ hearts raced at the sudden scare. Piper sighed in relief.

“Found it” she announced.

The Doctor stared at it for a moment before it clicked in his head what it was. “Ah, hello!” He greeted, with a hint of joy in his voice. The little creature grunted, ignoring him and continuing to shift through the garbage as if looking for something.

“You know what kind of troll it is?” Piper inquired.

“Oh, I don’t know what it is, but I know how old it is! It’s just a child!” The Doctor explained.

Piper stared at him in disbelief. The Doctor inched closer as Piper took a step back.

“You are an interesting fellow, you are,” the Doctor mumbled aloud.

He took his screwdriver and scanned the troll.

“Who are you, and how did you get a hold of a teleportation device?”

The troll then grunted again and looked at the Doctor. It looked concerned.

“Don’t worry, I’m not gonna hurt you” he reassured.

“Uncle Doctor, what if it didn’t come alone?” Piper considered, “What if it had siblings? Wouldn’t they be looking for…him (or her)?”

“Oh don’t worry, troll children are harmless. They won’t hurt anybody. Well, not by much…”

Suddenly, three additional trolls jumped from the shadows, one of them tackled Piper! Piper fell back first onto the ground, screaming in terror. The Doctor jumped to his feet in surprise.

Piper struggled with the troll’s grip. It felt like a large boulder, putting massive pressure on her chest and shoulders. The more she struggled, the stronger its grip was. Surprisingly it didn’t hurt her, at least not directly. It was more focused on pinning her down. The Doctor was about to try a sonic wave from his screwdriver, but his feet was soon caught by another troll. He tripped and fell on his stomach. He struggled, trying to get his feet free from its grasp. The troll he was formally observing, walked more into the open and grunted in excitement as he ran to the last one, who seemed to be snorting in communication with it. By this point, the bums in the alley skittered out, freaked at the bizarre scene before them. In the wrestle, Piper’s thermal mug, still half full of coffee, fell out of her pocket, and spilled everywhere, getting all over both her and the troll. Suddenly, the troll leaped off of her, squealing in pain, hot coffee dripped off of its skin. All the other trolls froze at its noise, surprised. The troll moaned a little as its skin started blackening at the touch. They all looked at each other, grunting and snorting confusingly. Then, with the music aroaming from the float going by, the trolls turned around, and hobbled away down the alley.

The Doctor scrambled to his feet and ran over to his niece, who was still on the ground back first.

“You alright?” He asked, holding out his hand.

Piper took his hand, and he pulled her up. She grunted.

“Yeah, I’m alright.” Piper looked down and tried, fruitlessly, to wipe away the coffee spill on her coat.

The Doctor scratched the back of his head.

“His siblings must’ve thought we were going to hurt him” he thought out loud.

“We’ve got to go after them! They’re heading towards the parade!”