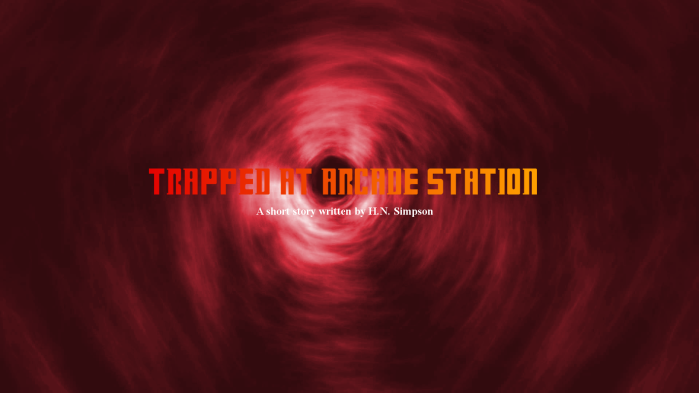 The Dalek suddenly vanished from sight with a blue glitchy swoop. All the citizens and soldiers seemed to vanish out of thin air. Aside from the crackling rubble, and now crumbling walls of homes, it became silent again. Piper peered out. The roads became quiet again. Sweet savory silence.

“What is this?” said the voice, now quieter this time.

Piper immediately recognized it as Kevin Monroe. She stood up.

“Someone has managed to get past the override and delete files of the war simulation. I made that impossible for any technician. Interesting. I had already suspected you of a companion, but this…”

“Yeah, and he’ll get me out soon enough!” Piper shouted into the air, then screamed louder, “YOU HEAR!?”

There was no answer. Piper stood there in the eerie quiet. One minute, two minutes, five minutes.

“He might be trying to cook up something else” She thought.

Slowly, she started to wander once again, through the empty city, pondering what was to happen next.

The Doctor eagerly watched Piper’s face. Her anxiousness faded from her glance, and her hands relaxed.

Then, he rose up. “Does anyone have any idea where the override could be coming from?” He asked amongst the small crowd.

The security looked at each other.

“No one? No one has a clue? You’re security for one of the most important stations of Earth, and you don’t have any knowledge of illegal transmissions?” He cried in disbelief.

Mr. Aikens reemerged. He had exited for a few minutes to return to his office. He was no longer bombastic and hostile. He was calm and collected. He had a tablet in his hand, and handed it to the Doctor. The Doctor looked at him, surprised for a moment, before taking it. He quickly read over the information displayed.

“Kevin Monroe?” The Doctor asked. He looked up. “The creator of the game?”

“I had to ask to go through Federation security, but I managed to that up. It’s a good chance he’s our culprit.”

The Doctor glanced back at the tablet.

He mumbled, “Has a Doctorate’s degree in computer programming, engineering, and History. Hold on…’Hacking the Academy Database multiple instances’. When he turned twenty-three, he went into the video game industry-”

Then, he said, “ ‘Kevin Monroe is known for sometimes hacking into his own games to provide unique experiences for his players’…”

“That History degree might explain how he knows about Gallifrey…”

He looked back up at Mr. Aikens. “That’s a pretty good case” he announced.

“He’s been on the Federation watch list since the release of his first game. He might be responsible for that override.”

Mr. Aikens shifted his weight. “Now, I am in charge of this station, Doctor Smith. I could give the order for an arrest any time I want. But, I would feel more comfortable if you made the call-” Mr. Aiken’s face changed to sympathy, “-I see that you’re very clever, and I get the impression that you know what’s best for her, rather than I.”

The Doctor glanced over at Piper for a long moment. His hearts sank watching her in this state: Terror, something he never wanted to happen to anyone he cared about, especially Piper.

“I promised her mother that I would keep her safe-” he turned back around, “-and I intend to do that.”

He walked back over to the game controls.

“I can reverse the override. It will take some time, but I can reverse it. If Mr. Monroe is taken into custody, maybe it can speed up the process.”

The Doctor faced the boss and said firmly, “Do not question him.”

Mr. Aikens was a bit puzzled why he requested something so strange.

However, he turned to the chief of security and said, “Send in the request.”

The Doctor circled back to Piper. “Meanwhile, I need to send a message…”

Piper had walked her way out of the city. The game environment had been changed, at least the weather. It had turned from warm, to cool. Instead of black night, the sky was orange and yellow, as the sun was beginning to rise. She sighed, heavily.

“How long have I been in here?” She wondered out loud, “It’s gotta be dinner time by now…”

Piper whirled around. There was no one there. At first, she thought it might have been the voice of Mr. Monroe, messing with her again. But this voice was different…someone familiar.

Piper stopped, and listened closely. It seemed the breeze had also conveniently stopped.

Then, she finally heard the voice again, “Piper! Ay! It’s me! Are you alright?”

She was right. It was the Doctor! Her chest fluttered in hopeful excitement.

“How are you able to communicate with me? This game has no open mic system!” She called.

“There’s a PA system that routes into the VR headsets in use. Although, it took me awhile to get it to work.”

“Uncle Doctor, it’s Kevin Monroe! He’s the one trapping me in here! He knows that-!”

Piper stopped for a minute to correct herself, but the Doctor interrupted:

“I don’t know yet. I’m only focused on getting you out. It’s going take a bit, but I can reverse the override. Can you wait a little bit longer?”

Piper’s heart sank a little. She had already been in here for more than four hours! She was getting tired, and hungry. But, she said, “Okay.”

And then there was silence.

She should’ve known Mr. Monroe would be listening in!

“But the Doctor has never had a companion like you. He has no family.”

“Something isn’t right…Something has changed.”

“I could care less about my game!” It growled, “Something has been altered.”

Then the voice went silent. Piper became puzzled. What was altered?

She lied down in the red grass again. Her eyelids were becoming heavy. This was becoming less of a real life, adventurous experience, and more of a fever dream, or a nightmare. She wanted more than ever, to just open her eyes, and be back in her bed. Then again, she would be afraid to wake up. That would mean the Doctor may have been just a dream. And she most certainly didn’t want that! The wind started to pick up as it blew through the field and on her face. She darted her eyes about the grassland. She wanted to check to see if anyone was around, even though she knew no one except spying Kevin Monroe, or possibly the Doctor could be listening in. After a couple more minutes, she started humming to herself:

“I come home in the morning light

My mother says when you gonna live your life right

Oh mother dear we’re not the fortunate ones

And girls they wanna have fu-un

That’s all they really want

When the working day is done

Oh girls, they wanna have fun

As she finished, she heard a sound. Feeling a little revitalized, she sat up, and looked at the sound.

“Oh, what are you trying to pull now?” she wondered out loud, not as annoyed as she wanted to be.

A few feet away from her, near a forest of evergreen trees, she could see an object that was glitching in and out. It was some kind of floating creature, that almost looked like a flame. Piper rose to her feet, and approached it. Sure enough, it was a creature, glitching out in blues and lime greens, like computer data that wasn’t rendering properly. Slowly, it started backing away, into the forest. Piper followed. As she went into the forest, which was growing darker, and more eerie, her head started to hurt.

Wires and circuit boards were lying everywhere at this point. The Doctor was sprawled on the ground with his sonic screwdriver in his mouth. He grabbed it and ran it over an exposed panel. He glanced up to the Vital Signs Module. Piper’s trigeminal nerves started sparking.

“She’s becoming too exposed to the VR program!” the Doctor exclaimed. “Any news on our friend, Mr. Monroe?” he asked as he put the screwdriver back into his mouth.

“The authorities have arrived at his house, but he isn’t responding. We have a confirmation he’s in there, but they’re waiting for the green light to break down the door” a security guard announced.

“Piper’s going to suffer brain damage! They need to do it it now!”

He looked the cluttered, disorganized mess of tech in front of him.

“I’m not going to make it in time!” He thought, “I promised! I promised that nothing would happen to her!

The forest grew dark. The glitchy creature was the only light illuminating Piper’s surroundings, all the more reason why she continued to follow it. Her headache wasn’t going away, and seemed like it was getting worse. Then, Piper began to see more lights. All of them were the same creature, and they seemed to close in on her! She began to pick up her pace, debating whether to keep moving forward, or run away.

“They have the green light, Doctor! They’re closing in!”

Piper was getting frightened again.

“This universe has been altered. Events have changed, or were never there at all; and they all revolve around you! The Doctor’s Niece!”

That clenched it. Piper diverted from the course, and started to run. Now she was running in darkness, with the chomping of leaves under her feet. But the creatures followed her!

“Get away! Leave me alone!” She cried.

“The Girl Who Tried To Stay.”

Suddenly, she was forced to a halt, as she hit a wall, and in that wall, was a huge, white crack. Her eyes widened. Her head was now throbbing, as she began to clutch it.

“Your eyes will flare, they will step lightly and with care,

She couldn’t look at the light any longer as it started to burn into her eyes.

“Her Ophthalmic branch is being strained!”

Suddenly, light burst through the crack, completely blinding her. She covered her eyes with her arms, as she cried out in terror. “UNCLE DOCTOR!” she screamed.