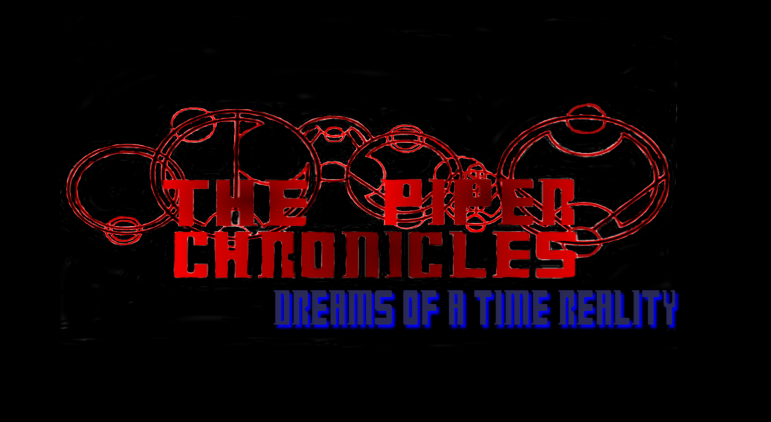 Raiden saw Piper and the Doctor burst from the door and race down the steps. “Piper! You’re alright!” He exclaimed. “Let’s go! Come on, the Tardis is this way!” The Doctor cried, pointing down the road. “Your ‘energy detector thing’?” Raiden asked, “How’s that gonna-?” Before Raiden could finish his sentence, Piper grabbed his hand and pulled him along. The road grew darker and darker as they got farther from the street-lights. All he could hear were two panting and running steps, along with his own. They ran into an alleyway were they could see lantern light from what looked like a doorway coming from the other end. The Doctor reached into his pocket and pulled out a golden key, with a long golden chain hanging from it. Piper let go of the Doctor’s hand and froze when they reached their destination. It was a box…a blue, 1920s style police box. The Doctor ran up to the double doors and put the key into the keyhole. “I recognize this police box” Raiden stated. “Yep, might have seen it a few times. Been busy. Humans, I’m never gonna get done saving you!” The Doctor exclaimed, fidgeting with the door as he unlocked it, “Lovely! In you go!” Raiden ran inside ahead of the Doctor, expecting Piper to follow in behind him.

He gasped. Inside was much larger than the outside! Inside, was a large, golden domed room, with round circles neatly in a row down the walls like a honeycomb. The floor was a grated surface, with an additional level below. In the center of the room, was a control panel, wrapped entirely around a glowing, aquamarine blue cylinder, that looked like to have some type of engine inside. Raiden ran back outside, with a big, excited grin growing across his face. “No! Way!” He cried. The Doctor seemed a little annoyed and waltzed inside, leaving the door open. Raiden walked around the base of the blue box. “It’s bigger on the inside!” He finally exclaimed. “Yep!” The Doctor called from inside, “Now get inside before the Argonigoes catch up with us!” Raiden turned back to Piper, who was still standing there, awestruck, grabbed her hand, and pulled her inside.

“Welcome to the Tardis! Time and Relative Dimension in Space!” Exclaimed the Doctor. He ran about the control panel, pulling knob, and flipping switched as the engine started to run. The Tardis started to rumble.

Raiden and Piper hung onto the rails for dear life. “Are we moving!?” Raiden exclaimed. “Yep! Moving up to orbit around the planet. Gonna turn the cloaking on so the Argonigoes don’t spot us” the Doctor explained. “This is a spaceship!?” The Doctor got a mischievous grin on his face as he went, “Oh, yes!” Raiden laughed in delight. The Doctor continued to beam, showing off his toy like a child. Then, the Tardis stopped rumbling. It was about the same time when the Doctor noticed Piper wasn’t saying much.

Piper stood from the entranceway, bewildered, very slowly taking in all she had seen. Raiden backed up to the railing so she and the Doctor could get a better look at each other. The Doctor stood there, eagerly awaiting her response. Then, Piper slowly started to walk towards him. The Doctor’s grin melted away into a more emotionless stare. Piper raised her hand, and placed it on his chest. A chill went down the Doctor’s spine when he felt it. “You’re…You’re real” Piper breathed. The Doctor smiled, sadly. He pulled the wisps of Piper’s hair out of her face and behind her ear. “Yes, I’m real…I’m here, sweet girl” he said, softly. They stared at each other for a moment, unsure what to say.

Finally, Piper said, slowly, “Well…this is awkward…eight years I’ve had questions….but, now I have nothing to say…I guess, the first thing I can say is…Hello. It’s a pleasure to finally meet you. My name is Piper. What’s your name?”

“My name’s…the Doctor” the Doctor replied.

Piper inhaled sharply, tears filling her eyes, looking at the ground for a moment. Then, she looked back up at her Mystery Man’s brown eyes.

“They told me you weren’t real!” She cried, “Six years they told me that! And I believed them! If you were real, and you were constantly watching me throughout my entire life, why didn’t you come to defend me!? I needed you! They told me I was bonkers!”

“I know, I know,” the Doctor said, remorsefully, “Believe me, I wanted nothing more than to see you, face to face, talk to you. But it wasn’t safe…”

“Not safe!? You sound like my mother! How was it not safe!? I’m not special! All I needed was some closure!”

“It wasn’t that simple.” The Doctor and Piper looked over to Raiden, who was quietly standing there, listening. Raiden lifted his head, and shifted his weight. He sighed and walked over to Piper. “You are special, Pipes, just not in a…human-y…sort of way” he stated. He reached into the pocket of his hoodie, and handed the fob watch to her. Both Piper an the Doctor’s eyes widened.

Raiden looked down at the floor, embarrassed. “I found it in your jacket. It was whispering, so I went to see what it was. Then I hid it so you wouldn’t see I had been snooping through your things…” Raiden gently put his hands on her shoulders. “It showed me things, Piper. Wonderful, but terrifying things. Things about you…” He looked up at the Doctor. “Things about him.”

Piper stared at him in disbelief.

“So that’s why the Tardis was detecting the energy signature…” The Doctor said, a bit angry, “It was because you opened it.”

Raiden looked at her for a long moment. He was a bit hesitant to say, because the answer sounded crazy. “You’re…” Answered Raiden, “You’re not human…At least, not the real you…You’re a Timelord…Just like the Doctor. This-” Raiden gently pushed Piper’s hands to her chest, with the fob watch in her grasp, “-Has the real you inside.” Piper’s eyes widened. She ran her hand on the lines and circles on the watch. “Timelord…” She echoed, then mumbled, “Lord of Time…” Then, Piper looked up to the Doctor.

The Doctor smiled. “Yes, I am,” he replied, in a more quieter tone, “The Tardis is my time machine.”

“Prove it. I can buy that you’re an alien with a spaceship, especially after what I’ve seen tonight, but not so much the time travel part. Take me to the day I was born.”

“That part of time has been closed off. It’s impossible to get there.”

Piper thought for a moment.

“How early can you take me?”

The Doctor looked at her, solemnly. Without another word, he started adjusting controls on the Tardis, causing the engines to grind as it sprung to life. The Tardis rumbled as Piper and Raiden held onto the rails to keep their balance.

Then, it stopped. The Doctor gestured Piper over to the door. Piper slowly walked up to it. Slowly, she creaked it open. The morning sunlight nearly blinded her. The Tardis had landed up against a brick wall, next to a couple port-a-potties, and in front of her was a house half constructed. Piper stepped out into the fresh air, Raiden following close behind. “I recognize this place…” Piper said. The Doctor hung back, watching them walk over away from the construction site. Across the street, was a condo building, generically brown and concrete gray. There was a light on in the right side of the building, near where the kitchen would be. “Get down!” Raiden hissed as he pulled Piper down to a leaning position. A man walked up to the building. He was carrying a little girl in his arms. Piper recognized him instantly. It was the Doctor, only his hair looked slightly different. It was combed over, rather than floofing up in the front of his head. Piper looked behind her, back to where the Tardis was. It was hard to see, but she saw the Doctor standing in front of it, keeping a close eye on them. Piper turned back around to watch. The other Doctor walked up to the door and knocked (to the best of his ability). A few seconds later, a woman opened the door. It was Piper’s mother, Carla. Piper slowly moved her hand over to Raiden to hold his. Raiden glanced over her, surprised, but also concerned. Carla and the other Doctor spoke a few minutes outside, before going in. Piper suddenly lept to her feet and took off down the road. She wanted to see more. “Piper!” Raiden hissed. Cautiously, he rushed to follow her. Piper ran up to the house, and peered into the window. Carla and the other Doctor were facing away from Piper’s vision, but she could get a better look at the little girl. Piper covered her mouth in shock. It was herself! The little girl laid unconscious on the couch, with now a green wool blanket covering her. After the other Doctor finished talking with Carla, he bent down, kissing the girl on the forehead. He knelt and sat there a few moments, closing his eyes and swallowing hard. His face showed pain, pain to leave her behind. Then, he stood up, and silently walked back to the front door. Raiden pulled Piper to the side of the house, as to not be spotted. Piper was in awe of what she had seen. Carla wasn’t Piper’s real mother. The Doctor gave Piper to her.

After the past Doctor had gone, Piper and Raiden crept back to the Tardis where the present Doctor was waiting. Piper held the fob watch more tightly in her hand, lost in thought. The Doctor wasn’t even going to ask if she understood what she had seen. Finally, Piper looked up to meet his eyes and said, “Those lizard men are dangerous, aren’t they?” The Doctor slowly nodded. “And they will tear apart the planet to get this, won’t they?” She held up the watch. The Doctor nodded again. “Yeah” he said, barely audible enough to hear. Piper put the fob watch in her pocket. “Then we have work to do…”